General, medicinal and historical information about Ginseng and their product from CSI 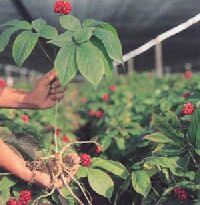 American ginseng, Panax quinquefolium, is one of seven hundred plant species in the Araliaceae family which includes parsnips, celery and carrots. The Araliaceae family is subdivided into seventy genera, one of which is Panax or the ginseng family. In turn there are at least five species of ginseng; two species are native to North America and three species are native to Asia. Of these five species only two are known for their exceptional curative properties, Panax quinquefolium, known as American ginseng, and Panax ginseng, known as Oriental or Asian ginseng. These two species of ginseng look very much alike and have similar chemical compositions. American ginseng is most likely a distant cousin of Asian ginseng which found its way to North America over the ancient land bridge between Siberia and Alaska. 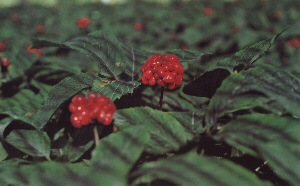 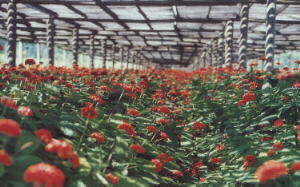 In recent years Western culture has become increasingly interested in aspects of oriental culture and medicine. Along with the adoption of such Eastern medical practices as acupuncture and imaging, many North Americans have been won over to the healing effects of the ginseng root. It is being taken as a tonic to enhance vitality, to increase stamina and to build up resistance to the psychological and physical stresses of modern life. The curative powers of ginseng are unique in the way they affect the whole body. According to ancient Chinese doctrines, a plant part that resembles a human body part will have a therapeutic value in that location. That the ginseng root resembles the entire human form indicates its use as a restorative that will bring the body into harmony. This harmony, expressed as the Chinese philosophy of yin and yang, is held to be essential to a healthy body and a peaceful spirit. 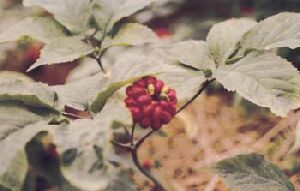 Western medicine evaluates the effectiveness of ginseng in a different but complementary way. The active ingredients in ginseng are complex carbohydrates called saponins or ginsenosides. Individual ginsenosides appear to have separate effects. Whereas one particular ginsenoside stimulates the central nervous system, another may sedate the central nervous system. Other ginsenosides produce such effects as balancing metabolic processes, decreasing blood sugar, improving muscle tone, stimulating the endocrine system and maintaining proper hormone levels. Research has even shown that ginseng is effective in maintaining and even restoring the cell’s capacity to function and therefore may reduce a number of symptoms of old-age.

Although research into the effects of ginseng is ongoing, Dr. I.I. Brekham, a pioneer in ginseng research, has come to the following conclusions after twenty-five years of experimentation:

2) Ginseng defends the human system from the effects of prolonged physical strain.

3) Ginseng acts as a mental stimulant without the side effects of other stimulants.

4) Ginseng stimulates the endocrine glands, including the sex glands. 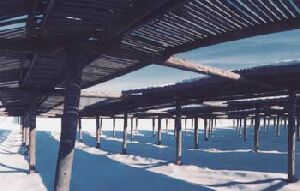 Panax ginseng was discovered over 5000 years ago in the mountains of Manchuria, China. Although probably originally used as food, it quickly became revered for its strength-giving and rejuvenating powers and its human shape became a powerful symbol of divine harmony on earth. By the third century AD. China’s demand for ginseng created international trade in the root allowing Korea to obtain Chinese silk and medicine in exchange for wild ginseng. By the 1900s, the demand for ginseng outstripped the available wild supply and Korea began the commercial cultivation of ginseng which continues to this day. 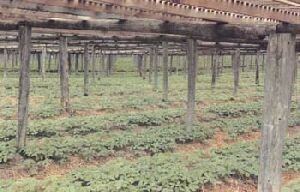 The commercial harvesting of American ginseng began in Canada in 1716 after a Jesuit priest, working among the Iroquois, heard of the root so valued by the Chinese. Reasoning that the environment of French Canada closely resembled that of Manchuria, he began searching for examples of this wondrous herb growing in the Canadian hardwood forests and after three months of searching he discovered American ginseng growing near Montreal. Thus began a vigorous export of ginseng from Canada to China where American ginseng quickly became much in demand. Before long ginseng was discovered growing in the wild in New England, New York , Massachusetts and Vermont and many an American fortune was made on the ginseng trade. 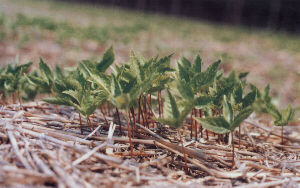 By the end of the nineteenth century, however, the wild root was near extinction in North America due to over-harvesting and the destruction of its natural habitat. At this point, farmers began cultivating the sensitive plant and after numerous failed attempts the first harvests of cultivated ginseng reached the market. From 1880 to1960 the ginseng trade experienced many ups and downs for reasons as diverse as blight and world wars but since the 1960s the trade in American ginseng has grown steadily.

In the 1990s more North Americans than ever have been converted by the wonderful and various curative properties of ginseng and in addition to the trade still flourishing with China, there is a sizeable domestic market for the root. 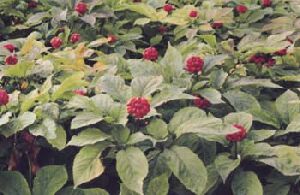 According to tradition, the optimal dose of ginseng is two to three grams per day, or a slice of root about the size of an almond sliver, or if using powder, a capsule of powder. The root can be brewed and taken as tea, simmered for one hour in chicken soup to make a healing broth, aged for three months in a quart of liquor and consumed as a nightcap or may be simply chewed.

However you take it, I’m sure you’ll enjoy the preventative and curative qualities of ginseng that have been enjoyed by the human race for over 5000 years.

CSI ginseng is grown on the fertile soils of the Great Lakes region. This unique agricultural region coupled with both the perfect climate and the most meticulous agricultural practices help us to produce only the best quality ginseng root. We are one of the first ginseng root production companies in the Great Lakes region. Our ginseng product is shipped world wide to Canadian, North American, and Asian markets. CSI Ginseng Products are made from whole ginseng root. This allows our customers to enjoy the full potential of the healing and medicinal power of the ginsenocides contained in ginseng. Our customers only receive products made from whole dried ginseng root. You can trust CSI Ginseng Products for all your ginseng needs. All our products are guaranteed to be 100% pure North American Ginseng.